Symbol of Modi’s India, Imran Khan of Alwar is his family’s Abdul Kalam

November 16, 2015
In the parts where he comes from it is generally believed that a man’s reputation travels faster, farther, and wider than the man himself. Primary school teacher Imran Khan from Alwar in Rajasthan, who never travelled outside his country, could not have imagined that one day his name would be heard from across the seven seas. 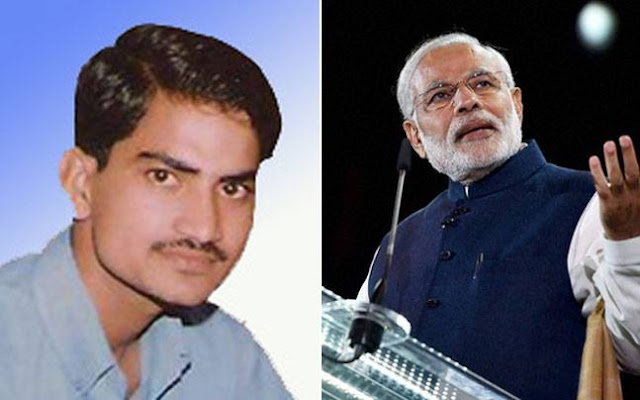 Imran Khan being interviewed by the media in his courtyard in Alwar.


When Prime Minister Narendra Modi said his India resides in people like Imran Khan in his address to a thunderous crowd at Britain’s Wembley Stadium on Friday, Alwar’s Khan became an instant hit.

Journalists like me were furiously typing his name in Google search to know who this Imran Khan was. I instantly sent him an email requesting an interview, following up with a phone call in the morning.

“It feels good,” replies a still-surprised Imran when I ask him how it felt to be named by none other than the Prime Minister of the country as an example of a true Indian. “I did not expect this ever,” he tells me with a nervous laugh.“Right now there are so many journalists, media, and television vans parked outside my house,” he says, adding, “My parents are wondering what all the fuss is about. Unke bete ne aisa kya kar diya (what significant thing has their son done)?”
What did Imran Khan do?

Thirty-four-year-old Imran is a primary school teacher in the Government Ups (Sanskrit) Kathumar School in Alwar, Rajasthan. In 2012, the Collector of Alwar, Ashutosh A T Padnekar saw his website that provided answers to questions related to general knowledge and was impressed. “He asked me to try my hand at making apps. I did not know what an app was. I had an ordinary phone with me, so the collector showed me some apps on his smartphone,” Imran tells me.

This was the beginning of his journey from obscurity to fame.

Imran learnt all about developing apps by reading books, searching online, and, as his younger brother Idrees later tells me, “from my books on computer science.” In 2012, he developed a science app for NCERT, and from then on there was no stopping him. “I have since developed apps on different subjects like geography, history, maths, and science for primary, secondary school children, and even for those appearing for competitive exams,” he says.

This year, he was invited by Smriti Irani, Minister of Human Resources Development, to showcase the apps to the ministry. “I have donated all my apps for free to the country,” he says with pride. This was under the Digital India initiative to give access to online learning material for students and parents.

Teacher who wanted to be a scientist

Imran had only passed his Higher Secondary when he had to take up a teaching job.


“My father is a farmer, and though I was very good in mathematics and science subjects, he could not understand its value. Everyone advised me to take up a government job as soon as possible,”

he says, recalling his past. Imran later went on to do a double MA in English and then in economics through a private college.

As a child growing up in Khareda, a village bordering the Sariska Tiger Reserve in Rajasthan, Imran found himself a misfit. The 10 km distance to school from his home was never a deterrent. Rather, it was the lack of support to pursue higher education in science that he found difficult. “I wanted to be a scientist. I was passionate about maths and science. But there was no encouragement or support to help me pursue these subjects. In our country everyone places more value on getting a job, and if you get a government job your life is set,” he says.

“He is our family’s Abdul Kalam,” says Idrees, the 25-year-old younger sibling of Imran. Idrees is a software engineer and he tells me that it is only because of his older brother that he could manage to be what he is today.

Imran is the third among four brothers and three sisters.
Imran’s app world

His most popular app is ‘General Science’ in Hindi which has over 500,000 downloads currently. The app, which doesn’t need Internet connectivity to function, currently consists of about 300 questions and answers related to life sciences in Hindi. Regarding the use case of the app, the description on the PlayStore states,

“This application helps you to understand basic science questions easily. It should be useful for students as well as in IBPS, IAS, State PSC, SSC and other government exams. It will be also useful for job seekers who are looking to get recruited by government firms or any government jobs and entrance exams.”

Imran’s other top-rated apps with over 1,00,000 downloads are on history GK, Hindi grammar, geography GK in Hindi, Indian political GK and his first ever app ‘NCERT Science in Hindi’, which he launched in 2012. All his apps have mostly favourable reviews with users complimenting the quality of content, simple design and User Interface.

In addition to the above apps, Imran also has a number of other apps catering to diverse categories such as physics, chemistry, Solar System, essay writing, antonyms and synonyms, computer fundamentals, human body system, Mughal Empire, and so on.
Passion and perseverance

Despite an army of impatient media waiting outside, Imran is gracious enough to accommodate another question and replies that the youth today should learn to be patient and to persevere. He says,

“Whatever your passion, pursue it with total honesty, even if it does not yield any immediate results. In the long run, it would all have been worth it.”
LATEST NEWS Politics TRENDING