Actor Sathyaraj, who plays Katappa in Baahubali, has now been given eight days to apologise for the comments he made nine years ago. 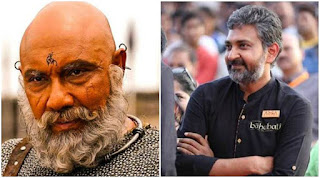 With just a week left for the grand release of the most awaited film of the year, Baahubali: The Conclusion, pro-Kannada organisations have intensified their protest against Sathyaraj for his comments on Kannadigas during the Cauvery water crisis row. On Thursday, protesters burned an put a garland of slippers on life size banner of actor Sathyaraj and also burnt his effigy.
After Rajamouli's emotional video requesting his Kannada friends to not stall the release of the film, actor Sathyaraj has now been given eight days to apologise for his comments