AAP are better activists than administrators.

The man who has managed to bring politics out on the streets from the cushy rooms is now compared to Item Girl Rakhi Sawant.  RSS chief Udhav Thakrey has claimed that Rakhi sawant can govern better than Kejriwal. Even a supporter like Chetan Bhagat felt ashamed of Kejriwals Rail Bhavan protest and termed AAP as an Item girl, Shinde called him Mad and NCP's DP Tripathi called them Saap.  Rakhi Sawant was believed to be a hungry woman for fame. She thanked Thackeray for saying that she can govern better than the Delhi CM. She believes if the Gujarat Chief Minister can run the country by selling tea, why can't she do being an item girl. It’s not about the political class who changed the opinion against Kejriwal .We have  V Balakrishnan, ex-CFO, Infosys, Meera Sanyal, Ex-banker, KV Sridhar, creative head, Leo Burnett, and other members of the professional/new entrepreneurial class  who are in the AAP  have to rethink about their choice. All these entrepreneurs joined AAP for Intelligent reform but the party seems to do a Robinhood and street justice act which may not augur well for India to develop. 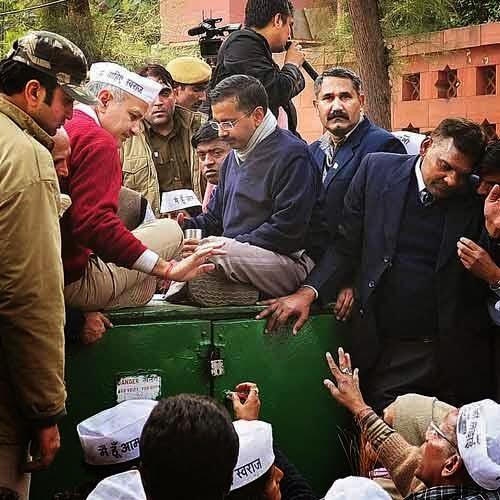 There is a clear difference between being and activist and governing a state with all the legislative powers. If memory serves me right, it was Arvind Kejriwal who said that as they could not achieve everything through activism, they were planning to enter politics. So where did that common sense that prevailed then go away now? Was it pure populist and has he also fallen trap to the political class and completely behaving as one? It's not a good sign and true these corporates who have joined the party now need to really re-assess & re-think their plans and the party to which they want to get affiliated.

Why he never thought that he was leading a street side protest that could have snowballed into something ugly — as often happens in India. These are genuine questions that every common man has within for Kejriwal. I am saying common man because intellectuals have a different set of questions and doubts . Is it a fact that in Arvind Kejrival's entire service of 20 years in Indian Revenue Service, he never served outside Delhi, even though the norms of the service are that all IRS officers serve a posting only for 3 years in a place.  Kejriwal in the reply says that there were 276 such officers who were not transferred owing to shortage of the IRS officers in Delhi.

He disrupted the life of people in Delhi for hours and he threatened to disrupt Republic day parade. ISI and the maoists have been trying to disrupt Republic day from years, then where is the difference in your thoughts. Soldiers receives medals of bravery, small children gets their due for saving lives of people and kejriwal calls republic day a Drama.  Think of a situation if the Indian military start protesting against AAP. Is Kejriwal  cleaning the system or damaging it further?