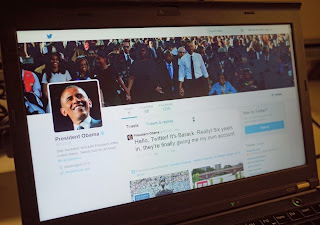 The White House announced today that @POTUS is the official handle for the commander in chief.The President of the United States of America is one of the most powerful people in the world. President Barack Obama already has a Twitter account that's quite active, however his campaign manages that feed. With this new username, updates will come directly from the president himself.

“Hello, Twitter! It’s Barack. Really! Six years in, they’re finally giving me my own account,”” Obama tweeted from his verified @POTUS account, which had more than 217,000 followers in its first 45 minutes,now at 1.23Million.


His Twitter page featured an image of Obama, his family and civil rights leaders crossing Edmund Pettus Bridge in Selma, Alabama, on the 50th anniversary of the Bloody Sunday march earlier this year. He described himself as “Dad, husband, and 44th President of the United States” and followed his alma maters, his beloved Chicago sports teams, cabinet members,
TRENDING