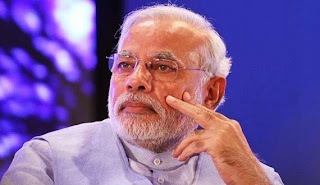 On May 16, the Prime Minister Narendra Modi completed one year of BJP's remarkable victory in the Lok Sabha election. But, Modi was not in India. He was touring India's most powerful neighbour China. He also clicked and posted the 'most powerful' selfie on Twitter a day before that.

The respected international newspaper 'The Wall Street Journal' carried a story titled 'Did Modi Just Take the Most Powerful Selfie in History?'. The WSJ said, "The prime ministers of the world's two biggest countries leaned on each other Friday for what may be the most politically power-packed selfie in history.

Indian Prime Minister Narendra Modi pulled out a smartphone during his visit to Beijing's Temple of Heaven, extended his arm and cozied up with Chinese premier Li Keqiang for the shot.

The Prime Minister Narendra Modi's foreign visits attract both praise and ridicule in equal measures. He is a polarising figure even here!

His admirers claim that Modi has successfully changed the International opinion and perception about India after he took charge as the Prime Minister. They argue that Modi's foreign trips have elevated the status and stature of India across the globe. They cite the example of his visit to America, Australia and recent one to China.