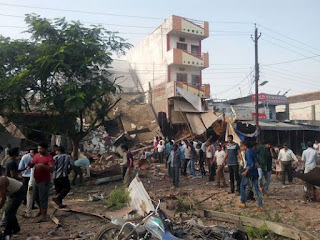 A gas cylinder explosion outside a hotel in the central Indian state of Madhya Pradesh killed at least 30 people on Saturday, a local police inspector told Sputnik.


Home Minister of the state Babulal Gaur ordered a thorough investigation into the incident and pledged severe punishment for the guilty.

"Blast is so severe that we are unable to identify the bodies. So far we have counted 30 dead bodies. We have pulled the injured peoples from the debris and admitted in hospitals," Shivji Singh said.

According to him, the explosion of the gas cylinders was triggered by a blast of a detonator kept in a nearby building for mining purposes.
LATEST NEWS TRENDING