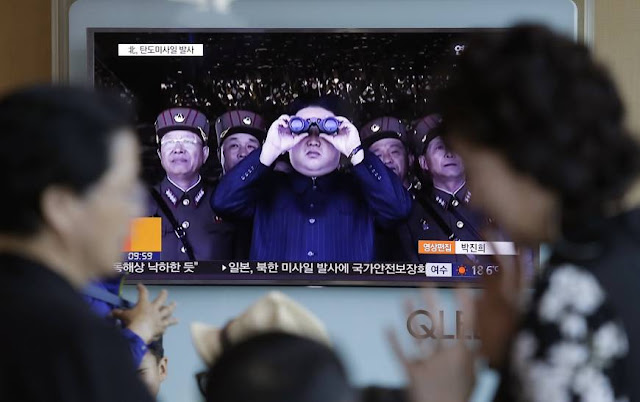 The U.S. Pacific Command confirmed the test-firing, which it said took place around 5:30 a.m. at a site near Kusong, North Korea.

Japan’s Defense Ministry said the missile flew for about 30 minutes, reaching an altitude of more than 2,000 km (1,245 miles) and was believed to have traveled some 800 km before falling into the Sea of Japan about 400 km outside of Japan’s exclusive economic zone.

Defense Minister Tomomi Inada said the launch, which was likely conducted at a steep “lofted” trajectory and hit the highest-ever altitude recorded by the Defense Ministry, could be of a “new type of ballistic missile.”

Later in the day, a senior Defense Ministry official, speaking on condition of anonymity, said that even a ballistic missile with a range of about 1,300 km usually hits an altitude of several hundreds of kilometers at its highest point. The official said the “rather unusual” altitude means the missile could have been lofted, meaning Pyongyang may have intentionally fired it at the higher altitude to shorten its flying distance.

The Pacific Command, however, ruled out the test being one of a long-range missile capable of striking the U.S.
LATEST NEWS North Korea Ballistic Missile