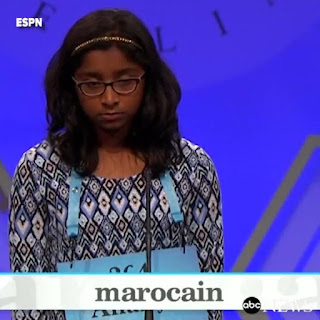 The Spelling Bee is a competition that begins in local schools, boasting more than 11 million spellers. The cutoff is age 15, and this year the Bee saw its youngest speller ever in 6-year-old Edith Fuller. Fuller made it until late Wednesday before she was sent home, but she figures to have a very bright future.

Vinay said she has two plans for her prize money: sharing it with her younger brother and putting it into her college account.

"She had a deep passion for reading," said her father, Vinay Sreekumar. "The biggest thing that she wants to do is sit and read."

The Spelling Bee is a grueling test of academia, but it's also extremely important in keeping kids interested in reading. Despite the fact it may not be the most-watched event (particularly when it's up against Game 1 of perhaps the most anticipated NBAFinals ever), it's good for kids to see other kids who are successful because they read and study like crazy.

It takes a tremendous amount of work and mental fortitude to win the Bee, and Vinay (along with everyone else who competed) absolutely deserves praise for her performance.
Ananya Vinay of Fresno
Location: Fresno, CA, USA